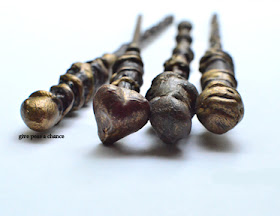 The one on the far right looks like it's floating. Wingardium levosa... I'm a nerd

I saw this wand tutorial on Pinterest and decided to make some for the girls. I couldn't get that method to completely work, so I'll show you what I did instead.
It was the perfect time to make a wand because Piglet wants to dress up as a Gryffindor in her school parade. We don't really celebrate Halloween but the girls dress up year round- even on Halloween, so I thought these would be fun to have. When we were in Florida the church had a "Fall-ing for Jesus" harvest festival, I miss those!
These wands were easy and cheap to make. The gold paint didn't look that... well gold in our house, once I took the wands outside they were pretty blingy. But my girls will like that. There's also another tutorial on Pinterest that makes wands with a hallow core, how cool would it be to put a red feather (phoenix), human (Veela), or horse hair (unicorn) in the middle while making your wands? Yes, I am a geek.
I tried to make an Elder wand and Luna's wand. I couldn't get the petals to form for Luna's wand, so I formed a heart on the end of Pixie's wand instead.
These are wand glamour shots :). 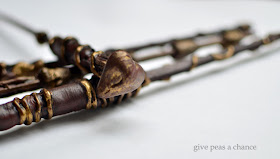 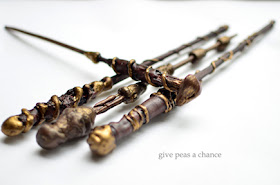 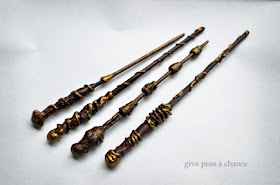 I ended up making four of these because chopsticks come in pairs. Two of them are regular wood chopsticks, the other two are take out chopsticks- the disposable ones. So, let's get started. ACCIO hot glue gun! (Too much? Sorry. Not really.) 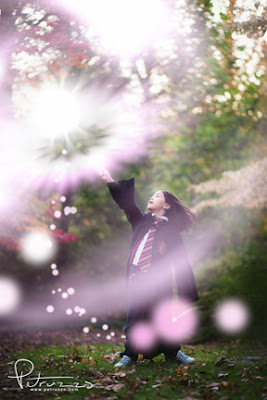 *Paint note- I used 2 shades of brown, a bottle of black, a bottle of Staining Antiquing Medium- same bottle as the craft paints, and gold.

1. Heat the glue gun. Take one chopstick at a time and put glue around the bottom of the handle, you may have to do several "coats", the glue is (obviously) hot so be careful. Once it starts turning a little cloudy you can handle it. I also drizzled glue around the point and tip of the chopsticks also. Let the glue dry. 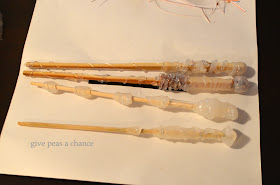 2. Give the chopsticks a once over to remove any strings of glue. This is important, because once you start painting those little stray pieces will look funny. So clip any loose little strings. 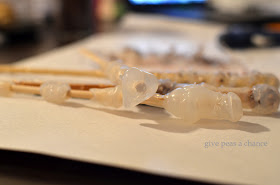 3. Brush on your first layer of paint, whatever brown or color you've chosen for the wand. Get paint into all the crevices. I had to do a few layers to get good coverage. Let the paint dry in between coats. 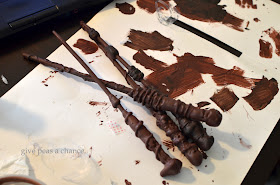 4. Take the black point and mix it 1:1 with the Antiquing medium. Brush or sponge it on the dry wands. Gently wipe off so that some of the black stays on and gives you a "worn" look. Do half the wand at a time so it doesn't dry on you. I wore disposable gloves, it helped spread this paint all over too. Let these dry.

5. Add detailing with gold, silver, other colors of paint. I went a little overboard with the gold. I also mixed the gold with the Antiquing Medium and wiped it on the Elder wand. Let these dry.
6. Check the detail, touch up paint if needed. I did another coat of antiquing in some areas to tone down the gold. Let these, you know, dry.
7. Spray the wands with the protective spray. Let these, just kidding, but really. Let them dry.
8. Get ready for a duel...
EXPELLIARUMS!

*I did not end up using beads like the original tutorial. It was to much of a pain, and I'm glad I didn't because the one wand that had the beads (OK, in my case small seeds), was a pain to paint. See the hot mess below. I peeled paint and seeds off the second wand.
I also didn't want to "handle" too much hot glue. 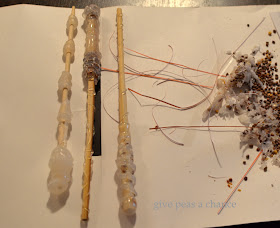 Thank you for reading Give Peas A Chance! Comments may take awhile for me to moderate! I'll post them as soon as I can and reply! If you haven't followed Give Peas A Chance check the right side of my blog to do so!
If you need something right away I can usually be found pretty quickly on my FB page.